At times when we’re writing or even in workplace conversations, we find ourselves using the same words over and over. Other times, we struggle for the right words that will explain what we mean. An idiom, a phrase or fixed expressions that usually have a figurative meaning, can be your ticket to improved speech and writing. 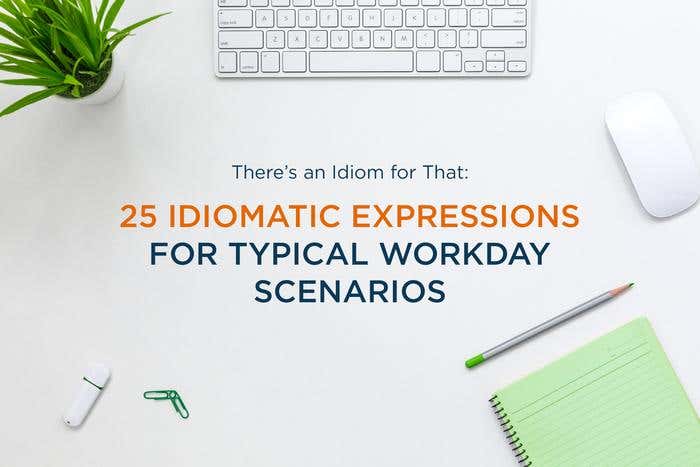 Here’s a list of idioms you can use for your articles or in conversations with workmates.

To raise the standards or to make a task more difficult to pull off.

Your impressive UX design raised the bar for our competitors.

2. Beat around the bush

To talk evasively or waste time with an indirect explanation.

I have a meeting in five minutes so stop beating around the bush.

Used to show enthusiasm for something that is impressive or brilliant.

Your tagline for that campaign is the best thing since sliced bread.

To be upset over something you can’t change or undo.

Stop crying over spilled milk and learn from the client’s feedback.

The competitor tried to cut corners in production, which sacrificed quality.

Our round-the-clock support team is ready to help anytime.

Used when something is still undecided.

Plans for next year are still up in the air.

Not making a clear choice or taking sides.

The boss is sitting on the fence about which employee to promote.

The option where you’re sure to succeed.

Mark’s suggestion is a safe bet since he did an in-depth research on the market.

To go back to working on something from the beginning.

We’re back to square one since the client didn’t like any of the proposals.

To get to the point.

We don’t have much time for this meeting so let me cut to the chase.

To stop working and go home.

Tom called it a day after working on the video animation for 12 hours.

Have the same understanding.

The creatives team is not yet done with the billboard design since, it turns out, the art director and copywriter were not on the same page.

14. Get down to business

To start doing what needs to be done

The legal department got down to business to make sure no issue arises from the merger.

15. Get the ball rolling

To get started on an activity

They got the ball rolling as soon as they reached their desks to make sure they meet the deadline.

When efforts are wasted or didn’t amount to anything.

They did everything they can so their effort doesn’t go down the drain.

To do more than what is expected.

One benefit of choosing to work with us is we always go the extra mile.

Not free to act or intervene

I asked them to speed up the process but according to them, their hands are tied.

The event was in full swing when Gary realized he lost the budget for the photographers.

Concisely or in few words.

That’s what the 6-month project is about, in a nutshell.

The final act that triggered a response.

Coming in late again for the meeting was the last straw for suspending Don.

An obvious choice or something that requires little thought.

Choosing between blue or yellow for the logo is a no-brainer. Of course, I’ll go for blue.

A situation where fast action is needed.

It’s a short work week so the team has no time to lose.

Off the top of my head, I believe it will only take us a couple of days to shoot the video.

Jenny was ahead of the curve after completing her training.

Ready to work on your next writing project? Browse through writing jobs here.

Freelancers have the incredible flexibility to work nearly anywhere. If you ever find yourself international consider some of these tips.

﻿How to Grow Your Business With Augmented Reality