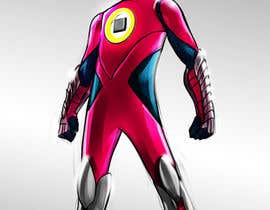 Innovation Accelerator ([login to view URL]) is looking for an illustrator skilled in comic book style to draw the character Captain Sideways in various poses that can be used on our website. The person we hire for the poses of Captain Sideways will then be rehired to draw short comics (6 to 8 panels) involving adventure featuring Captain Sideways.

Captain Sideways solves problems by looking at things sideways (from unusual perspectives). Because of the outfit, helmet, and visor, people are unable to tell the gender of Captain Sideways. Captain Sideways is alien but resembles an 11-year-old human. I want to avoid stereotypical masculine and feminine physiques that occur in comic book characters. That is why Captain Sideways is small and resembles an 11-year-old human. While in costume, the only visible parts are the mouth and cheek area. The skin color is medium brown, but no particular race or ethnicity is discernible. Inside the visor, a computer projects images onto the inside of the visor that helps Captain Sideways solve problems. The basis of these images come from the products sold by Innovation Accelerator, Inc., and emerge from the research of Dr. Tony McCaffrey. The computer's name is Seymour (or maybe C-More) because it helps Captain Sideways "see more" than one usually notices.

Although illustrators will initially be focusing on drawing the character itself, I will describe a sample adventure to help interested illustrators get a sense of what Captain Sideways does when helping people solve tough problems.

Sample episode:
While flying near Antarctica, Captain Sideways notices a large research ship that is in trouble. It struck an iceberg and will sink in two hours (like the Titanic). They do not have enough lifeboats and the nearest rescue ship is 4 hours away.

Upon landing, Captain Sideways takes the problem solving graph that was forming inside the visor and projects it onto a wall so the whole crew can work on the problem. I have attached a sample problem solving graph called a BrainSwarming graph. Also, I have included a link to a 3-minute video on BrainSwarming for those interested in learning more: [login to view URL]

Based on all the ideas from the crew, people quickly notice that iceberg is a floating surface and several lifeboats ferry some people there to await the rescue ship. The BrainSwarming graph helps people notice other things that will float (see attached figure). They empty their steamer trunks and tie them together. Then, they put wooden planks from the ship across the floating steamer-trunk-platform to form a make-shift boat.

Between the lifeboats, iceberg, and floating streamer-trunk-platform, they are able to keep everyone out of the freezing water until the rescue ship arrives.

“The work PaulMage2 submitted was of exceptional quality! He made the minor changes I asked in a short amount of time. He was very polite in his exchanges with me. I will definitely hire him again. ”