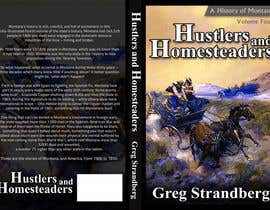 I'm enclosing a Createspace template you can work with. The size is for 6x9.

Should be easy for a photoshop person to just plug in the holes. Here are three other books that come first in the series, so I'd like it to look like those:

Description for back cover:

Montana’s history is rich, colorful, and full of excitement in this fully-illustrated fourth volume of the state’s history. Montana had 243,329 people in 1900 and most were engaged in the dominant resource industries of the time – mining and timber.

By 1930 there were 537,606 people in Montana, which was 4% lower than it had been in 1920. Montana was the only state in the country to lose population during the ‘Roaring Twenties.’

So what happened, what occurred in Montana during those thirty years – three decades which many know little if anything about? A better question might be, ‘what didn’t happen?’

From a foreign war with Spain to fighting the Spanish flu, Montana took part in nearly every major story of the early 20th century. Some events were local – Anaconda Copper shutting down Butte and thus the state in 1903, forcing the legislature to do its bidding – while others were more international in scope – Otto Heinze trying to corner the copper market and ushering in the Panic of 1907, something that hit Montanans hard.

One thing that can’t be denied is Montana’s involvement in foreign wars. The state supplied more than 1,000 men in the Spanish-American War and several of them won the Medal of Honor. They also happened to be black, something that wasn’t talked about much. Something else that wasn’t talked about much were the wounds both physical and mental suffered by the men coming home from World War I, which cost Montana more than 3,000 dead and wounded, a number 2% higher than any other state in the nation.

“shahed25 was very fast and made the few changes I requested. I\'m hiring them again to do some more PDF cover design work for me.”