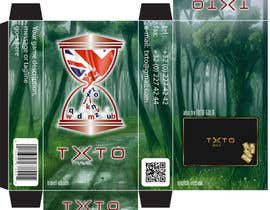 in order to help you, we come with some details for the concept:

the graphic design for the box... there has to be like a road (a road from another world - a fantasy world) the road passes through all faces of the box, and on this way, somehow has to be integrated the symbols for the chosen cultures (English or French speaker countries).
In this design, you can integrate the theme of the letters falling through hourglass, and forming a flag in their fall.


For the ones that already know the concept, sorry for repeating it, but everyone has to know it for a better approaching of the next product.

TXTO is a card game similar to the classic card game, but with the following differences:

-TXTO cards contain letters instead of numbers on classic cards,
-TXTO cards are slightly longer than the classical,
-The rules of the game is designed so that players can have fun in forming words with the cards in the game.

The product will be released in several editions,
the first one for which a graphic e design contest has already awarded, it's called "TXTO Gold". You can see the design in attach. (There is the logo that has to be used.)
The vision is that over the years TXTO has to achieve the classic card game fame.

The design of the package and cards should reflect the concept expressed above and integrate the following requirements:

1. The box will be similar in sizes and design (opening system) like a standard cigarette box.
2. The graphic design of the box has to integrate the logo (you can change only the colors of the logo)
3. The rest of the graphic design is at your free choice, in order to be THE MOST ATTRACTIVE and appealing for the USERS OF THE LANGUAGE that is designated for (language in the title of the contest)
4. It has to tease and challenge the viewer's curiosity
5. In some cases the back of the box can receive some advertising
6. In some cases the back of the cards can receive some advertising
7. The cards will stay in two separate stacks, on the width of the box
8. The cards will try to fit the box keeping the 100/56 aspect ratio
9. Between the language version of the product, the only difference will be the number of cards for each letter, the box graphic design, and the back face of the cards.
10. consider that the product name was not chosen yet (TXTO pocket, TXTO friend(ly), TXTO travel)
11. consider that we may use fluorescent ink for printing, so the letters can be viewed in the dark.