ILLUSTRATION / CARICATURE OF A MONK BREWER. 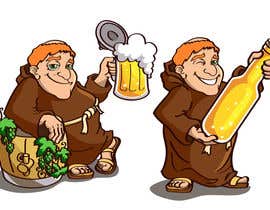 It is a Franciscan monk , master brewer of the Middle Ages .

Her dress is brown habit that reveals feet with sandals, with white lace belt 3 knots.

Chubby ( but not much ), friendly , happy, smiling, kind face , yet with character, a little bald (perhaps with tonsure ) , middle-aged , has no beard, rather short.

You need to present the two illustrations to win the contest , and the specifications described .

He stands (facing the left side ) , and in his left hand holding a beer mug , clear plastic lid German style , with caramel colored beer with foam.

Have a look with a mischievous smile , facing the pitcher, pleased to have managed to produce a great beer.

You can add other items, such as a keg of beer , a bag of barley, or any other . These items are not mandatory, it is left to the imagination of the artist .

He stands (facing the left side ) , with a giant beer bottle in his hands (one hand under beer and the other to one side), with a look forward, with a wink , a smile of complicity , smiling, satisfied of choosing the best brand of beer. The idea is that this giant bottle of beer, you can substitute another easily, like beer bottles presentation of different brands.

References to the kind of smile that we want. (Tables of Eduard Grutzner )

Style of illustration we seek.

The drawing must have a cartoon style , with exaggerated features , such big feet or big toe , big face with respect to the body , without the use of gradients , strokes well worked , etc ...

Those are some examples of the style we want:

“I am very happy with the work. A great professional.”